This week the International Pilgrim Virgin Statue of Fatima has been traveling throughout the Diocese of Buffalo, and today will be at Our Lady of Fatima parish in Elba, NY.  How fitting that Our Lady is here on the First Saturday and the Feast of the Immaculate Heart, because this very same statue first entered the United States from Fatima on December 12, 1947, through the Diocese of Buffalo.

According to an article in The Union and Echo newspaper:

“A great, spontaneous demonstration of faith was the result of the visit of the statue of Our Lady of Fatima to the Diocese of Buffalo this week. In less than three days some 200,000 people visited the small replica of the original statue, which is enshrined at Fatima, Portugal, where the Blessed Mother appeared to three children in 1917.  At least 150,000 persons, many of whom stood in line for hours, touched the statue while it was in St. Joseph’s New Cathedral…It was necessary to call on the Police and Fire Departments to guide the thousands who crowded into the New Cathedral.”

Bishop John O’Hara also wrote, “We owe a great act of thanksgiving to God for the manifest spiritual blessings that accompanied the visit of the statue of Our Lady of Fatima to the Diocese of Buffalo. A real avalanche of prayers for peace, in reparation for sin, prepared us for the visit and accompanied the stay of the statue in our midst.”

More than 50,000 others viewed the statue in Niagara Falls, Bowmansville, Batavia and Elba.  From there, the statue traveled on its first coast-to-coast tour across America and parts of Canada from 1948 – 1950. 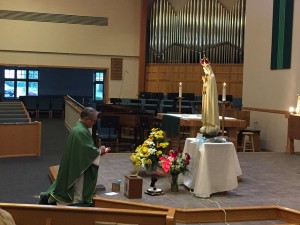 Our Lady is again touching people across America through the Fatima Centennial U.S. Tour for Peace, her second coast-to-coast tour. Today, as in 1947, Our Lady of Fatima Church in Elba is hosting the final appearance in the Diocese of Buffalo before she continues on her way.