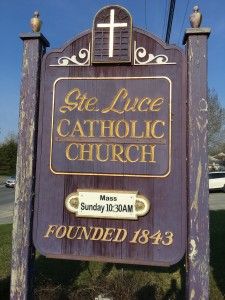 It seems very fitting that the Fatima Centennial coast-to-coast tour of the International Pilgrim Virgin Statue began in many of the states that were original colonies of the United States, the destinations of peoples in past centuries who set out from Europe in search of a place where they hoped to find freedom to live according to the religious convictions of their consciences: New Jersey, Connecticut, Rhode Island, Massachusetts, New Hampshire, New York, and Pennsylvania.

As we traveled from one place to the next on roads which have served travelers for centuries and that recall to mind America’s colonial past in the architectural structures, cemeteries, and rock walls along the roads, I am struck by the thought that the World Apostolate of Fatima had its beginnings in this same area of the country.  The courageous spirit of the first colonists certainly existed in the enterprising efforts of Mr. John Haffert when, 69 years ago, he had the International Pilgrim Virgin Statue commissioned and brought to the United States for its first coast-to-coast tour. Just as those first visits of the Virgin sparked interest in our Lady’s message and a willingness to live out her peace plan from Heaven, so too today Our Lady continues to reach many people with the visits of her historic image.

There is one big difference between the first coast-to-coast tour and this present one: since 1947 the United States of America has become a very different place. The concern back then about the expansion of Russia’s atheistic communism has turned into a new concern about the influence of those errors which, as Our Lady warned, spread throughout the world and seem to have taken root in the United States. These errors have led to some of the threats to religious liberty we are experiencing today, and which the early colonists sought to avoid. As people are losing faith in nearly every human institution, Our Lady’s promise at Fatima that “In the end, my Immaculate Heart will triumph, and an era of peace will be granted to the world,” presents real hope that she will in time accomplish an unprecedented miracle of grace to bring the world back to a sanity that many in earlier generations crossed an ocean to attain.

I know from a personal level what the visit of Our Lady is capable of accomplishing. Thirty years ago (June 18, 1986), Louis Kaczmarek brought the International Pilgrim Image to my home parish of St. Andrew in Merrillville, IN.  I had just come home after having served four years in the Army and my mother told me something was happening at the church that I might find of interest. I went, saw the image, and listened to Mr. Kaczmarek speak about the message of Fatima. I spent that summer before college, reading all I could about Fatima and learning more about my Catholic Faith, while trying my best to live out what I had learned. Even though from early childhood my mother had instilled in me the habit of praying a daily Rosary, the visit of Our Lady that summer had a dramatic effect upon me at age 22. While it is not possible to know the long term effects the visits of Our Lady may have on any one individual, we can have confidence in their effect from the miracles of grace Our Lady has worked in the past. We know that those who already have some predisposition to live out the difficult message of Fatima can be greatly encouraged in that direction by her visitation.

From the farthest reaches of Maine

Fr. Kent Oualette is the pastor of a parish cluster of churches in the St. John River Valley in the northern tip of Maine.  Driving for miles through logging country to reach this area, I had no expectation of arriving at the thriving Catholic communities that I found there, or the impact the visit of Our Lady would have on the pastor.  We stayed in Fr. Kent’s residence the night before and the night of the parish event on May 12th.  On both nights we brought the image into Fr. Kent’s home where he conducts his morning prayers. He habitually wakes before dawn and is already praying as the sunlight begins to peek across the horizon. On the feast of Our Lady of Fatima, May 13th, he told us that as the light of dawn began to enter his room and the image of Our Lady became more apparent, he couldn’t stop repeating the words of Mary’s cousin Elizabeth, “And how have I deserved that the mother of my Lord should come to me” (Lk 1:43). Though Fr. Kent could hardly believe the favor granted to him, we know that with so many others such a moment would be completely lost. But the prayers and sacrifices we make help to supply those graces which lay the groundwork to predispose others to the wonder of Our Lady’s visit. The triumph of Mary’s Immaculate Heart is a groundswell of grace that emerges from within the hidden recesses of countless hearts, and Our Lady’s visit makes it bubble to the surface wherever she visits, and entire communities of faith can then share in its recognition.

Even before Our Lady’s visit, Fr. Kent had thrown away his television and each evening he visits one of the churches in his parish cluster where he celebrates Mass and conducts a holy hour of prayer, which includes Confessions and Eucharistic Adoration. Our Lady’s visit has greatly confirmed the efforts of this parish. For years to come the Church will benefit significantly from the graces that will flow from the St. John River Valley of northern Maine.

Larry Maginot is a statue custodian traveling with the International Pilgrim Virgin Statue on the Fatima Centennial Tour for Peace.