As the Pilgrim Statue of Our Lady tours the United States,
one man has much to be grateful for. 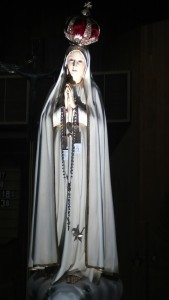 Jim didn’t always feel comfortable being in church. As a man with same-sex attraction, he felt that the regulars would sit in judgment of him.

God knows he tried. As a young man he sought help in the Charismatic Renewal movement, attending healing Masses in hopes that the Lord would take away his desires.

“God heal me from this curse,” he prayed.

“I was slain in the spirit, and that was a really nice feeling,” he said in an interview. “I got to a point where these good feelings would kind of go away and I felt like I had to choose who I was. The Catholic Church was just, you know, you couldn’t be gay and Catholic.”

So he spent the next two decades in the gay lifestyle, searching for love. “I didn’t find it.”

“I think Christ let me realize that this feeling that I had, it was like depression,” he said. “Deep down, I felt spiritually dead, so I thought I’d better come back to church.”

He picked up the Diary of St. Faustina Kowalska and attended Mass. But he held onto his attachments, which in addition to unchastity also included gambling and smoking.

“I turned to Mary,” he said. “I started praying the Rosary. I was so sick of myself with this repetitive, negative behavior, I just told her, ‘I give you my life.’ I had this intense feeling that I wanted to give it to her because I had no control over this.”

Aleteia spoke to Jim (agreeing to use only his first name) in the week leading up to the 99th anniversary of the first apparition of the Blessed Virgin Mary at Fatima, Portugal. The World Apostolate of Fatima has begun a yearlong celebration of next year’s centennial, initiating a tour of the Pilgrim Statue of Fatima throughout the United States.

The tour “is a nation-wide call to prayer and penance for peace in our nation and conversion of hearts,” the World Apostolate announced. “That’s because prayer is more powerful than any army on earth. Our Lady promised, ‘in the end, my Immaculate Heart will triumph.’ The tour and your prayers will create an outpouring of grace to allow Our Lady of Fatima to claim her dominion over our country through her Immaculate Heart.”

Jim has his own reasons to give thanks. Because of his devotion to Our Lady of Fatima, he believes, he has come to understand that God “wants to free you from the prison you create by your own free will. I always felt I was imprisoned by my addictions.”

After becoming more devoted to the Rosary, he said he felt “a veil was lifted over me.” For the past several months he has been chaste and has had “no urge or desire to go gambling.”

Now approaching 57, Jim attributed another act of “being saved” to the intercession of the Blessed Mother. About nine years ago, after initially giving up the gay lifestyle, someone invited him to do a holy hour in a Eucharistic adoration chapel. “I didn’t even know what a holy hour was. I asked a friend what you do. He said you can pray or read books or whatever,” while sitting in the presence of the Eucharistic Lord.

Because his gambling addiction had turned him into a night owl—he recalls at least once staying up for 40 hours—he had no problem going to the chapel in the wee hours.

“I really liked it. I felt really close to Christ when I was doing my holy hour,” he recalled.

But one night, as he was driving to the chapel, he had very bad heartburn. “I was like, ‘Dang, what did I eat?’ It was like there was a blowtorch there.

“So I get to the chapel, and the guy before me leaves, and there was like a fire inside of me. I had no clue what it was. I felt extremely nauseated and felt I must be about to die, so I just lay down on the pew and wondered, ‘What am I supposed to do if I’m about to die?’”

He prayed to Christ for mercy—and blacked out. When he came to, he started feeling better, but when the next person came for the 3 o’clock slot, he took Jim to hospital, where doctors told him he’d had a heart attack.

“If I’d had it at home I don’t know if I would have lived,” he mused. “Did God decide I should pick this hour in order to save me? I don’t know.”

One thing he does know, however, is that Our Lady of Fatima has been there for him.

“I believe in her grace and mercy and help.”