An important visitor, to Catholics worldwide, is visiting the Assumption Blessed Virgin Mary Parish in Lebanon, PA, June 25 and 23. She stands 3 1/2 feet tall and is made of solid mahogany wood. She is Our Lady of Fatima, a statue that for Catholics, represents Mary and the messages she is believed to have sent in Fatima, Portugal, in 1917. 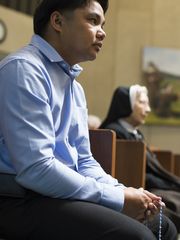 “I would put it this way, she’s the ambassador of peace,” says Patrick Sabat. He is the official custodian for Our Lady of Fatima, and has traveled with her since 2003. He is a good humored man, with kind twinkling eyes. He explains that in their apparition, she appeared to three young shepherd children. “She spoke of peace,” he says simply. Their teachings tell them that she presented a peace plan to the children. “The peace plan from heaven is a call for prayer, penance and conversion,” says Sabat. He explains that he doesn’t mean religious conversion, but instead refraining from sin. “There is a Greek word that describes that — metanoia,” says Sabat. “It means change of heart.”  Read More