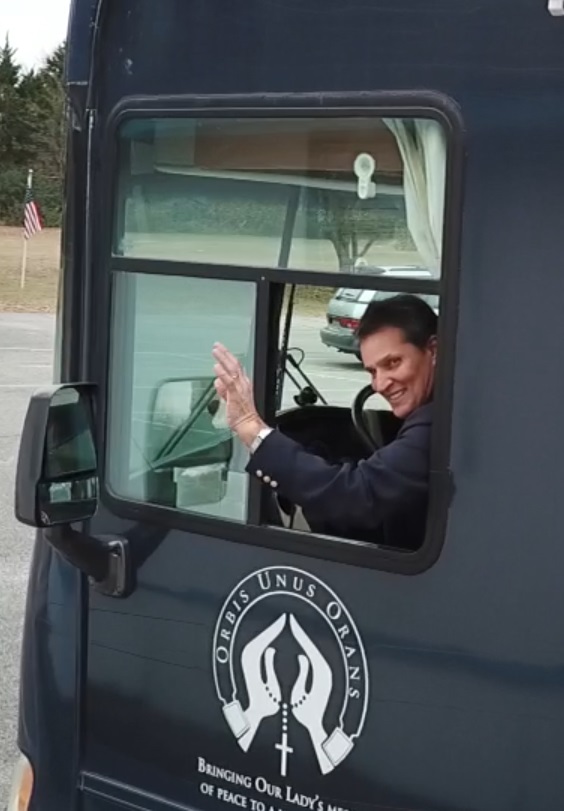 The Fatima Centennial U.S. Tour for Peace came to an end on Dec. 18, 2017, after a 22-month journey that brought the International Pilgrim Virgin Statue to all 50 states.  The tour launched from the National Blue Army Shrine in New Jersey on March 20, 2016—the start of the Fatima centennial honoring the Angel of Peace apparitions—and ended at St. Joseph Catholic Church in Marshall, TX, following the completion of the Fatima jubilee. In all, the statue visited 141 U.S. Catholic dioceses and made over 500 stops at parishes, schools, convents and shrines on its day-to-day journey in the RV motorhome.

“The Centennial Tour for Peace was conceived as an initiative to once again bring Our Lady’s message of peace and hope around the United States—100 dioceses in 100 weeks of the centennial.  It was to mirror the efforts of our founders 70 years ago, who introduced this historic image in 1947.  The overwhelming response to this tour shows that Our Lady is reclaiming her dominion over this country.  It has done much to bring about the triumph of her Immaculate Heart,” says Executive Director David Carollo. “The message of Our Lady given at Fatima in 1917 is for today, and our mission to spread it continues in this new centennial period.” 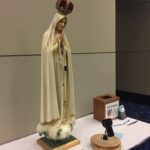 The statue will continue in 2018, visiting dioceses that were unable to participate in the centennial tour and resume visits to foreign nations. Its first stop was the Fellowship of Catholic University Students (FOCUS) SLS Leadership Conference, January 2-6, at McCormick Place in Chicago, IL.

Eight thousand people attended the conference, most of them college students from across the nation. The statue was venerated in the adoration chapel throughout the week. 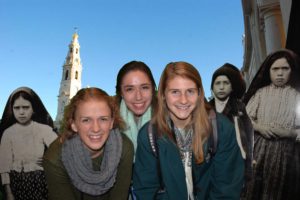 The World Apostolate of Fatima USA set up a photo booth at the conference and invited students to get their photo taken with the statue or the three shepherd children. The WAF is collaborating with FOCUS on an initiative to bring the national or international Pilgrim Virgin Statue to college campuses where FOCUS has a presence, at more than 130 public and private colleges and universities in 40 states, plus the District of Columbia. Campus visits will be scheduled whenever possible as the statues travel in those areas.

“Our academic institutions were targeted by atheistic communism, which spread the errors of Russia—namely an anti-God, anti-family and anti-life agenda—that has led to the breakdown of morals and society over the past century,” says Carollo. “Our Lady’s presence on college campuses will help spread the Fatima message to young people who are on the front lines in the battle for the culture and bring the grace of conversion and peace through her Immaculate Heart.

“Please pray for young people everywhere that Our Lady will touch their hearts and show them the path that will lead them to God and to truth.”